There are quite a few Prices Fresh bakeries scattered around Adelaide. The one I went to, heading north-west along Port Road, tantalises hungry commuters with not just fresh baked goods – but the option to drive-thru as well. What a genius idea. However, internally I’m torn on whether it’s a good one. Yes, the ease of a drive-thru bakery is appealing, especially with the dire cold we have at the moment. Yet, the door of the bakery is only 10 or so metres from the car park – and considering that it’s probably not a green salad we get from the bakeries – should we not be attempting to meet every exercise milestone we encounter?

This particular morning I had decided to take myself for a drive around Adelaide and try out a couple of bakeries on the way. Having not ventured to Port Adelaide for several years, and knowing there were a few bakeries around there to try, I braved the cold and rain. Heading up South Road, I turned up Port, and after a mere few blocks nearly passed right by the bakery sitting subtly on the left. Opting to walk-in rather than drive-thru, I wandered in through the front doors. A bright and bubbly server quickly got me one of their large, delicious donuts sitting in the glass counter. I noted that the internal atmosphere was a bit dated, not helped by a few older couples who sat in silence with faces to suit the weather. Unperturbed by their stares I bounded out, fresh donut in hand, and towards Port Adelaide. 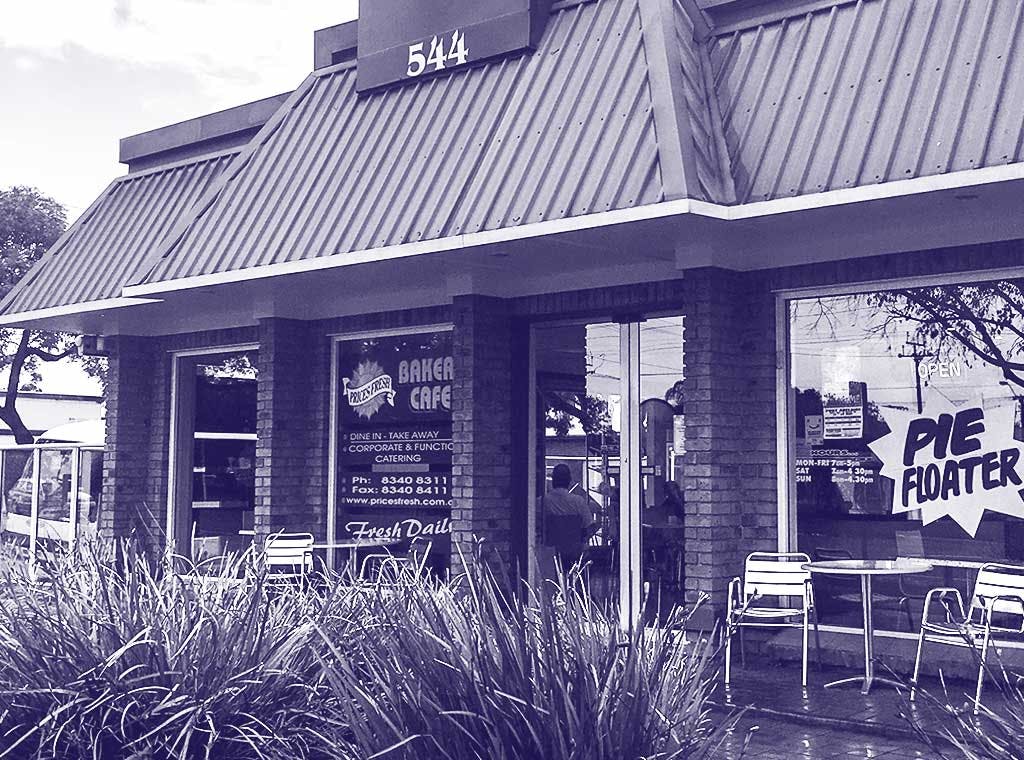 I can speak more about Port Adelaide in later blogs, but if you haven’t been for a while I would encourage you to go. Old buildings meet the shores of the river with a quiet, unassuming air. The cafes are delightful, the museums interesting and the beach not far away.

I didn’t expect much of the donut if I’m honest. The bakery had been recommended by a few people but I may not even have gone had it not been on the way to Port Adelaide. Walking into Prices Fresh I didn’t have the highest expectations of the donut to come, but as I drove away, the smell of the dough – yeasty and sweet wafting up – brought nostalgia. There was no way a dough that smelled that good would let me down – and it didn’t.

The donut had a thick diameter, perforated by a small hole. The dough itself was a pale golden brown with a sheet of white icing on top. The sprinkles added colour but would have been welcomed in greater abundance.

The taste of the icing was thankfully untainted by E-numbers, but strongly tasted of the icing sugar it was made with, leaving a slight aftertaste. The sprinkles were crunchy, fresh and would have been nice in more quantity.

With the first bite, I thought the dough was quite bland until, wham – the flavour kicks in! And what a great dough it was! The dough was fresh and yeasty, on the savoury side which blended well with the sweet icing.

The dough was a good density, with the right amount of chewiness that a good yeasty dough brings. It was fresh throughout. The icing was smooth, although slightly on the runny side. The sprinkles were fresh and crunchy.

Lovely, fresh donut with the added benefit of a drive-thru bakery. Well worth the visit if you are in the area.