One gorgeous, autumn Saturday afternoon, my husband and I were in search of some donuts. Our search was unsuccessful for by 3PM the majority of bakeries were shut or emptied of their delicious, fried goods. 3PM isn’t a particularly late time in the day, especially on a weekend, but so often the cravings hit when there is no bakery open to fulfil them. Thankfully, the genius idea of 24-hour bakeries exists here in Adelaide, open all hours and often public holidays too, so there is no barrier to your satisfaction. Enjoy Cafe and Bakery in Norwood is one such 24-hour donut provider, and open on this particular sunny Saturday afternoon.

Norwood is a gorgeous area of town; the facade of the bakery, however, is one to make a graphic designer squirm. It certainly stands out. It sits on the corner of a busy intersection with ample parking in the surrounding streets. As you walk up to the bakery you can smell the baking and once inside you are met by a large collection of standard bakery goods. For the donuts you had the choice of berliners as well as ring donuts both large and small. The large donuts were easily double that of the small ones, but only $1 more in price making the choice easy. The man behind the counter was as friendly and smiley as I had ever met and gave every customer a big smile. 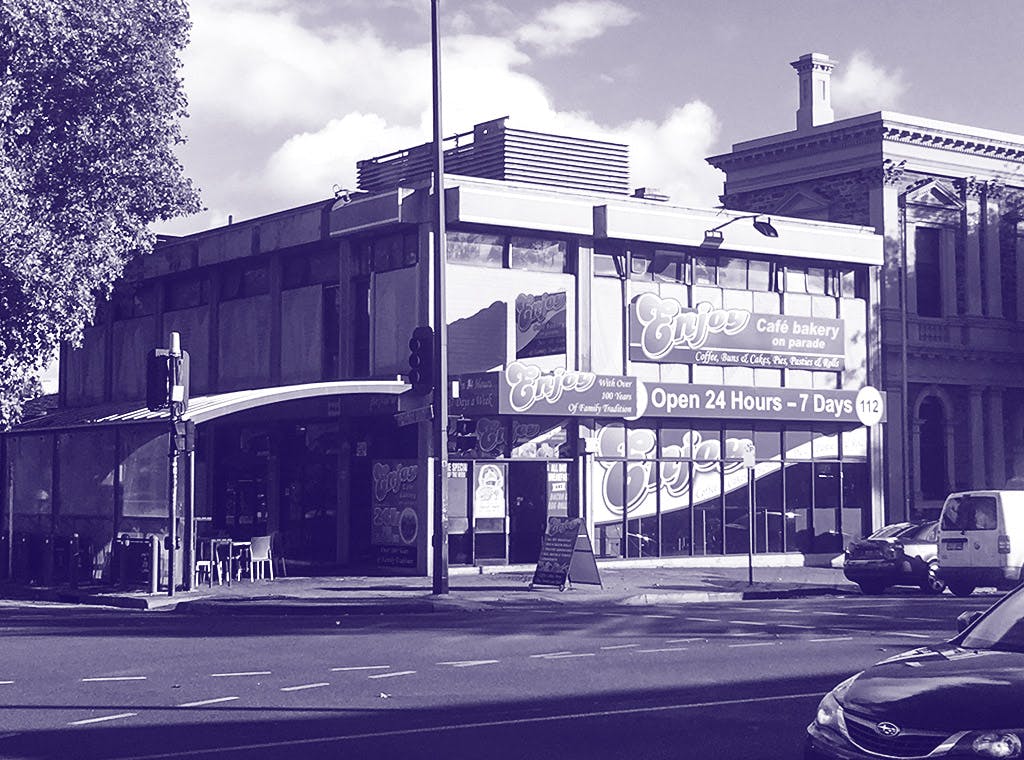 As we sat eating out donuts in the warm, setting sun outside the bakery the friendly server reappeared at my side. On a plate he offered a fresh cinnamon-jam berliner, still warm from the frier. The berliner was delicious, melting in our mouths with jam abundantly squelching out the sides. With the fresh dough smell, the warm autumnal air and the taste of a delicious donut on my tongue my brain was flooded with nostalgia, memories of fair rides and donuts at fall carnivals. I mention the berliner for it was a donut worthy of a mention, unfortunately just not meeting the criteria of this blog.

As mentioned the donuts came in two sizes, large and small. But even the small was of a good and generous size. The donut had smooth chocolate icing and was half sprinkled, although the icing didn't quite make it to the sides. The dough was a dark brown, almost like it had far too much time in the sun.

The chocolate icing was thick and smooth. The sprinkles were crunchy. Together they made a good topping for the donut, sweet and fresh. The icing could have been more abundant, to fully top the dough and perhaps a bit fluffier - but it was still pleasing to the taste buds.

The dough had a pleasant and yeasty taste. It wasn't too sweet, and not too savoury either, which made it a bit indistinct. The dough was slightly overdone, but there was no taste of stale oil which was good.

The first issue was that the donut had been kept slightly cold, which automatically makes them have a slighty drier texture. Despite this, the texture was actually pretty good. I prefer a thicker, chewier donut, which this was but it had little spring. There was no crunch to the outer shell, but this was provided by the crunchy sprinkles.

Not a bad donut although not helped by being slightly chilled, so I'm sure is better fresh - as proven by the delicious, fresh and still warm jam berliner that we then went on to try! However, when the cravings hit at 2AM - it's an option available and should be noted is also vegan.